Having considered the power of nouns for the craft of writing, the time came for us to look into the category of verbs and what they can do for a writer.

Well, from the writer’s point of view, what happened there was that … there were no verbs available, at least in Tarzan’s vocabulary, so if he wanted to have a conversation, he had to rely on sounds (which he made mightily, in line with the other beasts of the jungle) or on his limited number of nouns.

There was a time when people had to communicate like that and, I’ve seen it done even nowadays, some people still do! When they can, that is… because school, university and the otherwise ‘civilised’ world imposes some more content and structure in our messages.

And the verb category of words appeared, to save us from dead-end communication… Well, not all of sudden and we are still using verbs made out of nouns today, but this is more or less a figure of speech in the modern world.

Take the example of the noun ‘bomb’ – we can give it some drama or action, by using it as a verb: ‘to bomb Dover’ for example. We ‘jet’ across the Atlantic, or one mustn’t forget to ‘garage’ the car. Verbs thus are names as well, ‘… used to express action or being’. They depend of nouns, but have their own power nevertheless.

The power of a verb is different, depending on whether it expresses ‘being’ or ‘action’. How? Let’s go back to our Tarzan and Jane for another example.

Less powerful
a) To Jane, Tarzan is a big man.
He merely ‘is’ – it’s a simple observation.

More powerful
b) Now he grabs Jane under his arm and whizzes her from one tall tree to the next one, like gorillas carry their babies.
This in turn, will make you gasp! This is the action, the momentary drama.

Now, verbs are much more complicated than nouns, for the multitude of parts one needs to account for when using them. A verb has tenses, infinitives, participles and gerunds, not to forget their helping verbs – all of which presumably means something to the grammarians. And then guess what? Like a king in a democracy, a verb must agree with its subject – I’m not telling you anything new…

However, a writer’s concern is something beyond the grammar – it’s the meaning of the verb and the different potencies their different parts carry. Is it the same if you use the present simple or continuous? Of course not!

In grammar class you learn rules about when to use one or the other and why. In writing class you learn about the influence your choice has upon the reader, you learn to ‘feel’ your verbs and their parts and to tell them apart from that point of view. You are practising to address your audience.

The first sentence – present simple: a normal, usual action.
The second one – present continuous: the action is taking place right now; we’re in the middle of it – he’s crying… what can I do about it?! A different choice of tense and it kind of sucks you right into the middle of the action, right?

The first sentence: this verb expresses a state – this is a simple, calm observation. You might not even feel any fear in the back of your mind.
The second one: present simple – this is not a state anymore, it’s an action, so it gives our verb more power. It may even make you start thinking about the possible length of this action and your safety, right?
The third sentence: present perfect – this indicates that the action has taken place, it includes the present moment, and the result of the action is the current peaceful sleep of the lion. This is even more powerful that the present simple in sentence 2, for it suggests that the lion was awake beforehand. Now the drama is creeping in – he might wake up, you ARE on alert.

Here, can you see how, all three sentences being in the present tense, they actually trigger a different perception in the reader’s mind? Of course, when read aloud, the intonation of the narrator will infuse even more emotion into the listener’s mind, just as you used to experience listening to your bed-time stories as a child. To the untuned ear they may all seem the same – they do actually communicate the same thing. But that’s the whole thing: the tuned ear detects the difference - a difference of meaning and a difference of power.

The conclusion to all this is that the writer then measures the strength of the written words not by grammatical rule, but by his ear. The writer must have an ear, and just any one – (s)he must tune it to register where the power, and so the meaning, lies. (S)he must train him/herself to choose, in every context, the most powerful form of his/her words that will serve his meaning, if the desire is to write dramatically.

As we shall see later on, every sentence, if it is to be interesting, must be an unfolding drama. Stay tuned! 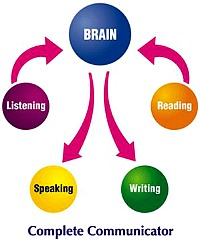