The comparison of adverbs is very similar to that of the adjectives that we considered previously. We also know that we can make adverbs from adjectives, one of the methods being by adding the -ly ending. For example, from the adjective ‘quick’ we form the adverb ‘quickly’. Just like the long adjectives, these have their comparison with more and most:

"The surviving antelope has to run more quickly than another antelope, in order to safely escape the hungry lion."

As with the adjectives, there is a small group of adverbs that have irregular comparison. The most common are the following:

"You have to be better, to qualify for the grand prix."
"Of the three paintings, she liked the first one best."

"The south of the country was hit by the crisis worse than the north."
"The young animals were worst affected by the snow during last December."

"She proved that she deserved the prize more than anyone else."
"Her husband was her most helpful friend, when she needed encouragement."

"The trip was less tiresome than they thought."
"The accident happened when they least expected it." 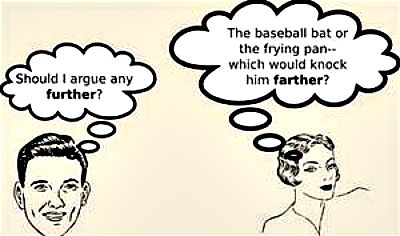 Many people are perplexed as to what the difference is between 'further' and 'farther'. We use 'farther' usually to express actual, physical distance, whereas 'further' refers to an extension of time or degree, or another abstract concept:

"He went to study German at an Institute of Further Education."
"Points A and B seem to be farther apart than they looked on the plan."

"We traveled farther in one week than any of us had expected."
"The trip took us even further into debt."

"Further troubles arose as they walked farther into the valley."